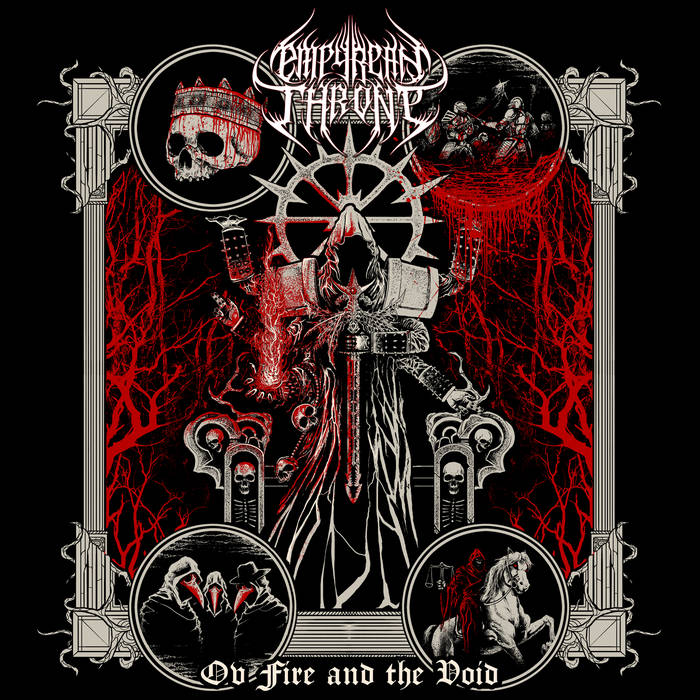 Press Release:
Symphonic black-metal order, EMPYREAN THRONE have unleashed their latest offering of musical propaganda in the form of a cover of Polish extreme metal legends Behemoth’s “Ov Fire and the Void”.

“Behemoth has and will always be a major influence for this band,” EMPYREAN THRONE vocalist Andrew Knudsen said. “They are one of the few bands that delivers one of the most visceral performances while combining both music and a well crafted visual element that continues to evolve and push the boundaries of contemporary art. With the triumph of their latest record, “The Satanist”, we of EMPYREAN THRONE wanted to pay tribute to a band that has inspired us to push ourselves harder as musicians and further into the depths of chaos.”

The cover also includes a symphonic overture carefully crafted by EMPYREAN THRONE cellist Kakophonix, as well as a full orchestral accompaniment that the band has become known for. The timing of the video also marks the beginning of a new era for EMPYREAN THRONE as the band begins preparing to enter the recording phase of their first full-length album entitled “Chaosborne” while promoting their collective message of ritualistic Chaos Gnosticism.

“We have been very fortunate as a band, the support of our legionnaires is the driving force behind our banner,” Knudsen said. “We wanted to give back to the metal community, and in our own way say thank you to Behemoth for their years of hard work, amazing music, and fearless spirit.”