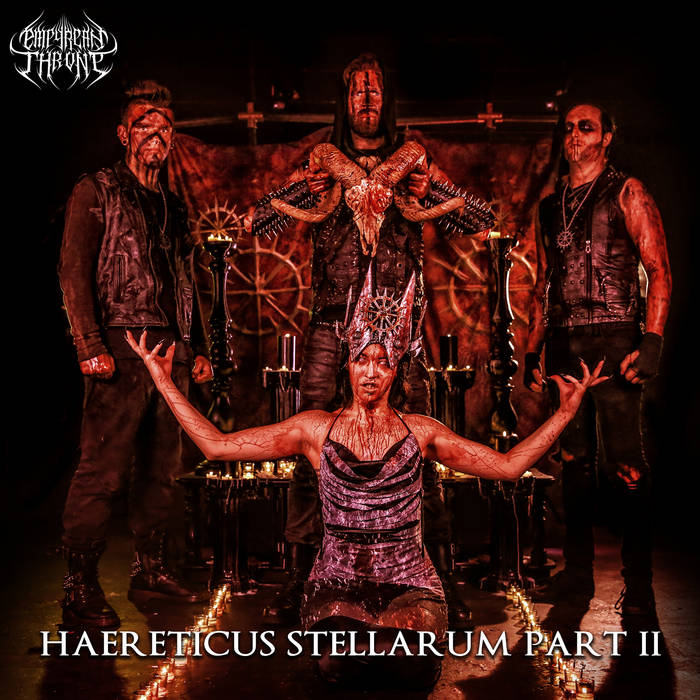 PRESS RELEASE:
And so I ascend into Chaos: part of the final passage of lyrical propaganda from the latest infernal offering from Chaos Gnostic order EMPYREAN THRONE’s “Haereticus Stellarum Part II” alongside the most ritualistic performance by the band to date in the form of a music video. No words are more fitting. “Haereticus Stellarum Part II” is the long awaited first tiding of musical divination from EMPYREAN THRONE’s first full-length record Chaosborne produced by Anaal Nathrakh mastermind Mick Kenney, to be released by the band come January 2017.

Brimming with the venom and hatred one would expect from black metal titans like Watain, and reinforced by haunting chants and invocations more akin to bands like Batushka, EMPYREAN THRONE makes a bold entrance into the arena of their major label contemporaries. Mesmerizing at first, “Haereticus Stellarum Part II” delivers an audio assault upon the listener, delivering a sonic flogging from start to finish. With “Haereticus Stellarum Part II”, EMPYREAN THRONE are able to simultaneously wield the blades of both the raw elements of traditional black metal and experimental orchestral music, a feat few modern bands can accomplish.

While the track provides the listener with the collective voice of the current incarnation of EMPYREAN THRONE, the video offers a glimpse into the ritualistic practices of the Gnostic order. “The theme of ascension constitutes the core of both song and video,” claims vocalist Andrew Knudsen. “With the music video, we wanted to capture the visual representation of the passage through the three veils before the Black Light Gnosis, as well as some of the fundamental aspects of Chaos Ideology. We were fortunate enough to be aided in this conquest by fellow chaos-worshipping grenadier, Luzia Lowe. Her performance is both captivating and terrifying. We are honored to have her as part of this production. Our hope is that this visual medium emphasizes the overarching theme of liberation presented in our new record, Chaosborne.”

With Chaosborne looming ever closer on the horizon, EMPYREAN THRONE are poised to strike deep at the souls of the metal community while bringing to bear their fanatical communion of blood and fire.

Into Chaos. Towards the Beyond. Ever Vigilant!

All rights owed by Empyrean Throne - 2016