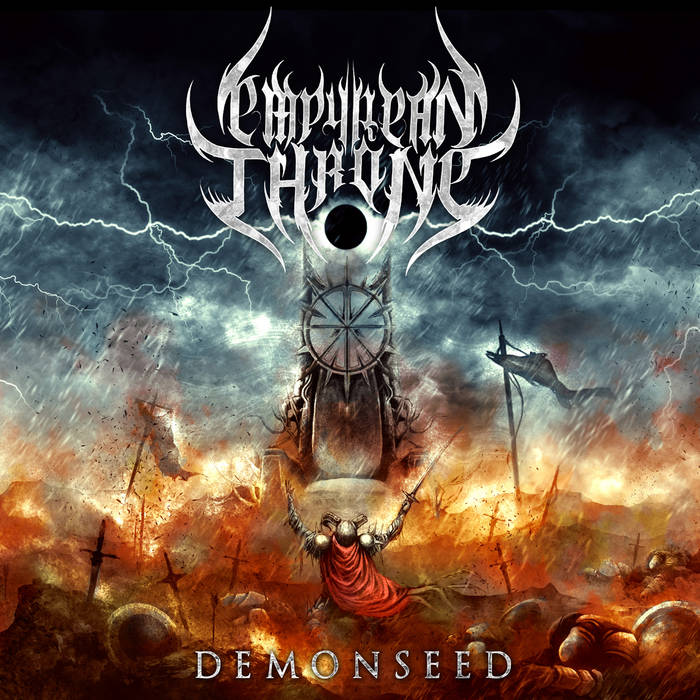 ArpKor Stomping death metal! Just like it should be! Favorite track: Demonseed.

Heretic in the Sun

Album download includes all songs, cover art, and a digital PDF of the record booklet.

The Band:
While traveling through the Nordic wastes of Scandinavia, Empyrean Throne was formed by vocalist Andrew Knudsen and bassist John Ashbaugh. The duo teamed up with skins master Dan “Danimals” Bruette to bring the percussion fury. After going through various guitarist line up changes the band finally recruited string wizards Mike Brennan and Bryan Schwarz into the fray. The most recent addition to band is that of composer and master-class cellist Kakophonix, who rounds out the team’s current roster. Briefly under the banner "Of Legions", Empyrean Throne began their live campaign with a bang, playing their second show as a band at the 2012 Summer Slaughter Tour in Anaheim, CA followed by two co-headlining shows with The Browning and Abigail Williams along with an appearance at California Metalfest later that year. But they have not stopped there. Since assuming their new identity, Empyrean Throne has continued their live campaign alongside local Epic Black Metal allies of Xanthochroid and Highland, and as the direct support act for death metal titans Disgorge and the all mighty Cattle Decapitation at the 2013 OC Deathfest. In terms of their stage show, Empyrean Throne is just not a heavy hitting dose of blackened death metal, it’s an experience with lots of personality, often ripe with multi-media theatrics that one would expect from a major label artist such as Dimmu Borgir. On the music side of the set OC Weekly described Empyrean Throne’s sound as “A vicious mix of raw black metal and traditional death metal, akin to a fuzzier version of Behemoth.”

The Album:
The record is a concept release about the rise of an Anti-Christ like figure, the destruction that follows in his wake, and the birth of the new world he leaves behind after his demise at the hands of his own creation. Amidst the blasting barrage of Dan’s double bass, the heavy guitars, epic cello orchestrations, and Knudsen’s brutal screams, “Demonseed” will leave the listener wanting more. Lyrically “Demonseed” holds nothing back, diving into themes of heresy, warfare, possession, government enslavement, end times prophecy, and corruption. Engineered, mixed and mastered by Ryan Williams former bassist for The Black Dahlia Murder, and recorded at Winds of Plague headquarters Sound Temple Studio, "Demonseed" is well-polished record that is not for the weak of heart. The record also features two guest performances by master class pianist Daniel Pappas (Track 6 - Follow the Plaguelord) and vocalist Tyler Gorski (Track 3 - Nothing But Vermin). “Our goal with this band has always and will always be to create nothing less than an all out metal assault”, says Andrew. John elaborated further by saying “To put it simply, this record is a full on onslaught of organized havoc.” Each member has their own musical background, which helps fuel the flames of creativity to produce a unique sound. “I started with the hardcore scene, then it just got heavier from there, the guitar guys are always giving me new grooves to listen too,” says skins man "Danimals" Bruette. “We all have very eclectic tastes that seem to mesh well,” says Andrew “Being Scandinavian, I am a huge black metal fan so I like to incorporate a lot of those elements into our music”. Kakophonix added, “These guys have their act together, and being a part of this band is one hell of a ride. I’m excited to see what the future holds for Empyrean Throne.”

“May the Dark Empyrean be upon you.”